Before I lay my cards on the table, I’m going to clear up some terminology. Exciting, right?? Everyone else thought so.

Indeed, that’s one of the reasons LCGs and Deck Builders have been so successful lately – they’re much more accessible, with a much lower financial AND knowledge barrier to entry.

But there’s something about a collection, isn’t there? The most expensive baseball cards ever sold utterly dwarf even premium M:tG cards without even being able to give you 3 Mana for nothing.

So we don’t believe that the days of CCGs are over. But since other kinds of card games are flush with popularity, we wanted to start with something you’re going to have to handle for any kind of card game: Card Art.

The theme needs to be beautiful and special.

Card art is your primary marketing tool. You need to nail the theme to the wall.

Remember when you saw those Cuphead screens for the first time? That’s probably the best (non CCG) example of modern marketing through in-game artwork. It was beautiful, and you just knew it was going to be special.

Beautiful artwork and a unique theme seduce an audience. If it strikes a chord, people will take three steps towards your creation without thinking about it.

This, they think, this I need to see.

Notice how many of these games are high fantasy? Hearthstone, Gwent, Elder Scrolls: Legends, Eternal.

This is no surprise. The genre was almost single handedly created by and for decades dominated by Magic: the Gathering, a direct descendant of the “The Golden Age of Fantasy”.

Is it possible to distinguish your art even though it falls roughly within the “fantasy” genre? Of course! Most of the above games are very distinct from one another.

But if you really want to stand out? Consider a non-Fantasy theme. It’s why the WWII-set Kards looks so incredible and why we decided to use historical cultures, soldiers and heroes for our own game, Epic Battles of History.

Remember: It’s not enough to look different. A broken portrait is different. It also has to look great.

The Sheer Amount of Art Will Stagger You 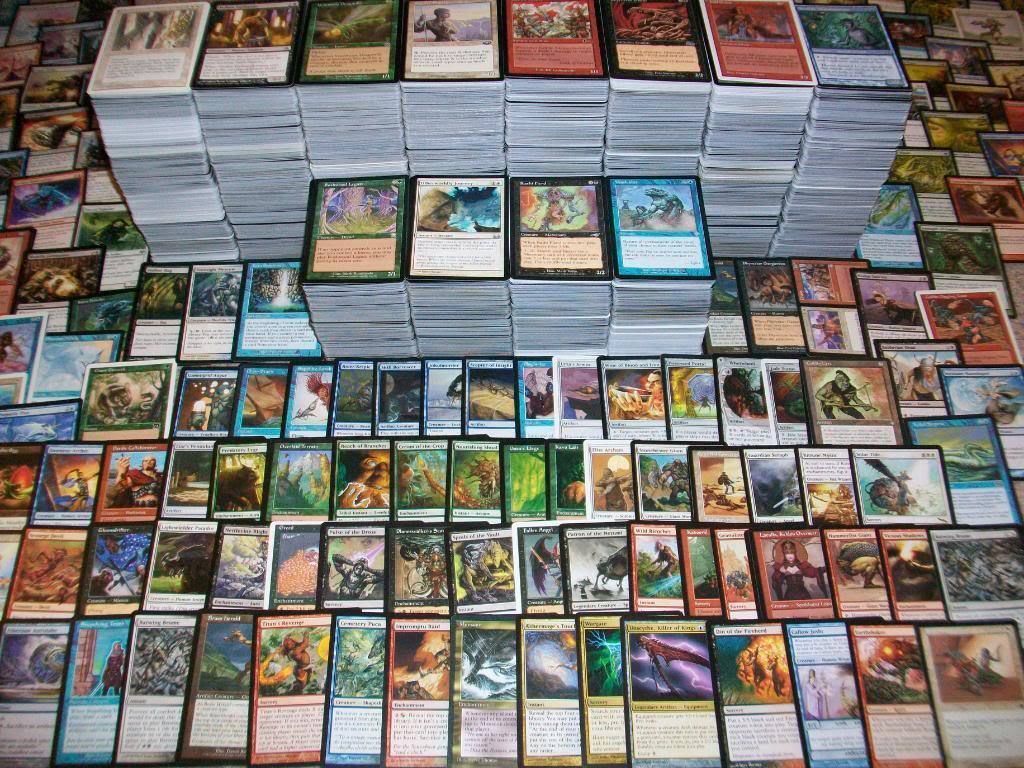 There is, truly, so much art. And most of it has to be some of the prettiest stuff you’ve ever seen in game because the player will spend so much time looking at it. Even “fast” card games are glacial compared to the twitch-lightning speed of reflex based real time games.

How many cards do you need? It varies by game and sub-genre but let’s take the big one, CCGs.

At a conservative estimate, you’ll need 300 unique cards to start having the complexity needed to have a deep CCG.

300 illustrations. That means 300 sketches with feedback rounds, coloring passes, rejections (there WILL be cards you’ll just have to cut and it’ll break your heart) and final renders. And all of this isn’t counting animations.

It would take one artist a lifetime (in game industry terms, at least) to create all those on his own so you’ll deploy or hire several artists. And while THAT sounds straightforward enough, artists are by nature independent creatives. That’s their job. To have a unique voice.

And when you have seven unique voices all contributing to the same card set, you’d better have a great conductor or all you’ll end up with is a racket.

This symphony metaphor is quickly slipping out of my unmusical hands so I’ll move smoothly forward: collaborating on theme, quality and output with a large team of artists requires a very optimized pipeline and experience in managing that pipeline. It’s not simply a matter of throwing talent at the problem.

The best card games often boast what seems like an incredibly diverse and exotic garden of artwork, but look a little closer and you’ll find that there is a theme, a color palette, a set of directions that keeps those cards looking unique but not unrelated. That doesn’t happen by accident. And even if you don’t consciously notice it, it’s why some card games just feel more “cohesive” than others.

So how much does all this art cost?

Your Artists Need to Know What They’re Creating

Obvious, right? Bear with me.

But to reach that next level,  cards shouldn’t be designed in a vacuum. Your artists and animators should understand what the card represents. 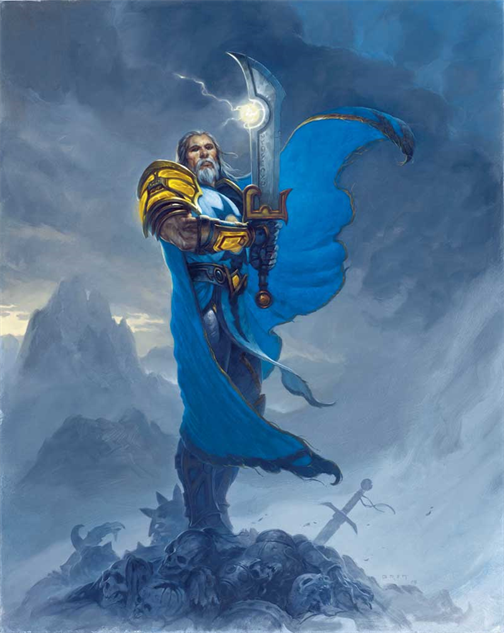 Even if you’ve never played Warcraft or Hearthstone, just look at him. He’s an impossibly muscular champion standing alone and ramrod-straight on a mountain of the skulls of his enemies, wearing golden-edged armor and cloak, wielding a sword with literal goddamn sun in it.

No artist could have created that without having an idea of how powerful he was in lore and as a card. Would the card have been just as powerful if he was drawn like any other knight? Sure. But where’s the joy in that? Either in creating it, or collecting it, or playing it.

Where does the player look when it’s not their turn? 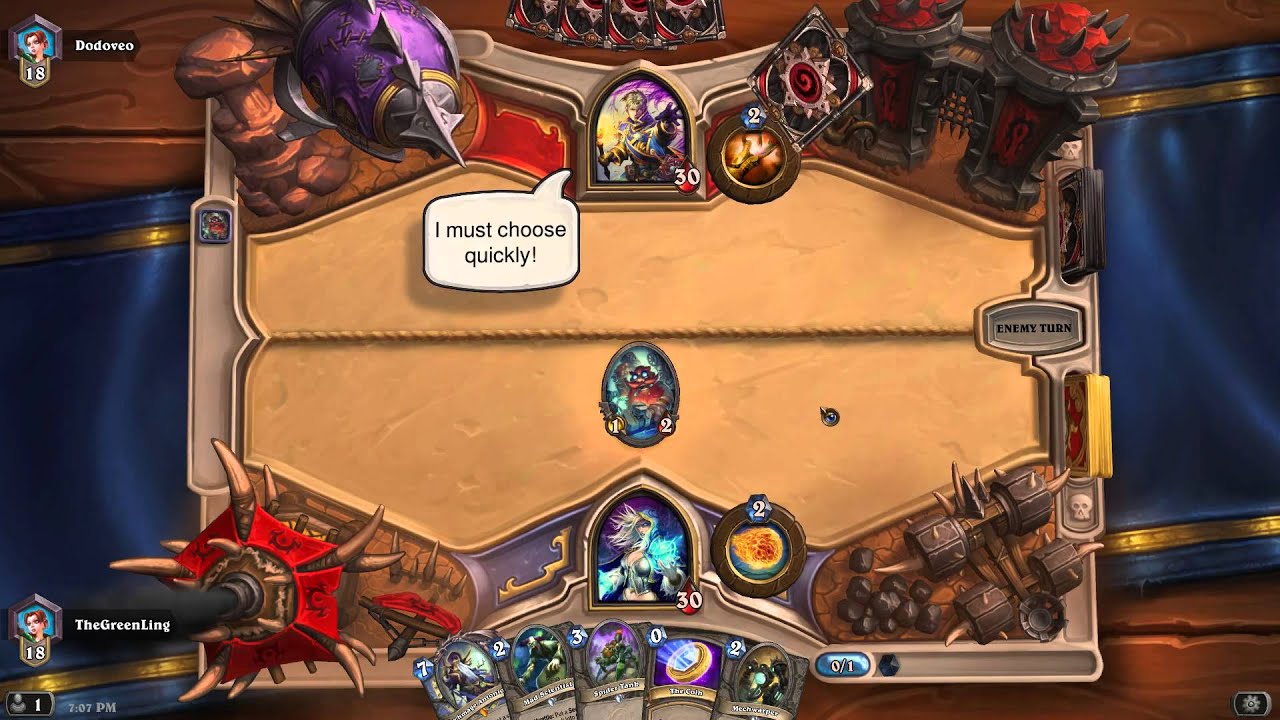 If the answer is “their phone” you’re about to lose a player.

In the age of the Attention Economy, turn based multiplayer games have an inherent handicap, at least for retaining casual players – there are certain times where they just don’t have anything to do.

And they’re waiting for the other player who’s taking forever for some reason.

And they don’t yet know the game well enough to be running possibilities in their head.

Do you see a disaster building up here? When someone is fidgeting and looking to entertain themselves while playing your game, i.e. a vehicle ostensibly created for the sole purpose of delivering entertainment, you messed up somewhere.

Now, there’s lots of way around it but they require some clever thinking and investment.

The specifics are important, but far too involved to get into here. What’s more important is remembering this guiding feature: The Player Whose Turn It Isn’t Needs Something To Do or Look At.

As you may have guessed, these are just high-level lessons. They may seem obvious to you, but I know we would have liked to have them when we were starting out with Card Art.

I hope they help you too.

If you have a CCG project for us to have a look at in more detail, go ahead and fill this out